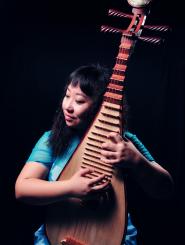 Yuxin Mei is a renowned pipa performer and currently a PhD student of Ethnomusicology at UNT and director of the UNT Chinese Ensemble. Mei's paper “Negotiating with Sound: The Living Sound Niche Created by the Chinese Immigrants in Dallas Area” won the Vida Chenoweth Student Paper Prize in 2016, awarded by the Society for Ethnomusicology Southern Plains Chapter, and she received the prestigious Presser Graduate Music Award in March 2018. She completed the Bachelor’s and Master’s degrees in Pipa Performance and Education at the China Conservatory of Music in Beijing and the Xingai Conservatory of Music in Guangzhou, China. From 2006-2012, she was faculty at the Xinghai Conservatory of Music, and previously she was Artistic Director and soloist for Zhuhai Chinese Music Chamber Orchestra. Mei has performed in China, Portugal, Norway, Singapore, France, Germany, Hong Kong, Taiwan, Macau and other countries and regions. She has taught masterclasses at the Macau Art School and the Chong Hong Chinese Music Association in Macau.  She was invited to Norway from 2012 to 2016 as part of the cultural exchange project "Spoor" hosted by The Cultural Rucksack in Akershus. In 1998, Mei released the album Spring of Zhu Hai.