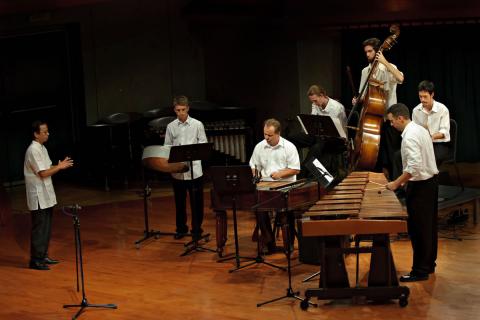 The Indian percussion ensemble developed in South India as early as the 4th century B.C. due to the availability of a wide variety of percussion instruments. These instruments include Mridangam, Ghatam, Kanjira, and Morsing. Traditionally, the ensemble is improvisatory in nature with a healthy spirit of competition among the performers. An "Avanaddha Kutapa," consisting of 24 drummers, is still performing during important rituals in the Temple of Tooth in Kandy, Ceylon. The ensemble performs compositions based on Karnatic music, a South Indian microtonal, modal art form which is built upon a highly developed theoretical foundation, with melody and rhythm as its two vectors.