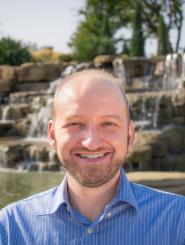 Robert Michael Anderson is a Ph.D. candidate in musicology with a minor in German Studies. His dissertation is entitled “‘Ideal Hausmusik’: Brahms’s Vocal Quartets (opp. 31, 52, 64, 65, 92, 103) and the Politics of Domestic Music ca. 1848-1900.” He is the recipient of the Karl Geiringer Scholarship from the American Brahms Society and his research has been supported by an Ernst Mach Worldwide Grant from the Austrian Federal Ministry of Education, Science and Research. He has received additional scholarships and awards from the Toulouse Graduate School and the Music History Area. He holds a Master of Studies in musicology from the University of Oxford and a Bachelor of Arts in music from Loyola University Chicago, with further studies at the University of Vienna. His article on Eduard Hanslick’s Vom Musikalisch-Schönen appeared in the Musical Times in 2013 and he has presented his research at national and international conferences in the United States, Canada, and the United Kingdom.