From May 11 to May 28, 2004, Professor Jackson visited Korea. He was accompanied by Jongkyun Kim, a current student at UNT, and Dr. Heejung Kang. Following is a letter from Professor Jackson highlighting his experiences and also pictures that were taken during his trip. 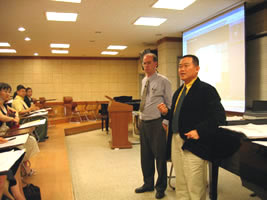 I want to give you a brief update of my trip to Korea (May 11-28, 2004). I was accompanied by a current student in Music Theory at UNT Jongkyun Kim (who organized and set up my lectures) and Dr. Heejung Kang (DMA in Piano UNT). My main hosts were Prof. Jae-Sung Park of Hanyang University and his wife Woo-Suk, who both were extremely kind to me during my trip; they introduced me to many important Korean musicians, musicologists, and theorists, and also took me around the country to see a Buddhist temple in the mountains and ceramics museum near Seoul. Prof. Park's daughter Suzie is currently entering the doctoral program in Music Theory at CUNY (where I went to school and where she now studies with Bill Rothstein), so there is already considerable expertise in Music Theory in the Park family! Prof. Park himself holds a Ph.D. in Music Theory from Buffalo University, where he studied with John Clough. 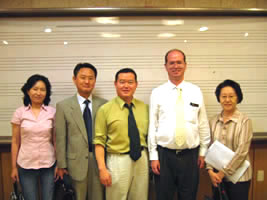 In the course of my tour, I spoke at the Korean National Conservatory, Kyung-Hee University, Sung-Shin University, Seoul National University, and Han-Yang University. Heejung translated for me at all of these universities except for Han-Yang, where I addressed primarily professors and advanced graduate students. At all of the universities except for Han-Yang, I presented a basic introduction to Schenkerian analysis talking about the Theme from Mozart's A major Sonata and also the exposition of Mozart's C Major Sonata. Where the students seemed to be more advanced, I also discussed a few Chopin Preludes. The primary focus in these lectures was the introduction of basic Schenkerian concepts and analytical notation. Heejung was widely praised for her "translations," which were as much explanations as straight translations. The students at all of the universities seemed genuinely fascinated by Schenkerian Analysis and Theory - there is great potential interest in this subject in Korea.

At Hanyang University, I delivered three lectures of approx. three hours each, which were videotaped, and which eventually will be broadcast on the Web. I began my lectures with a PowerPoint presentation about the history of Schenkerian Analysis, tracing the dissemination of Schenkerian theory from Schenker himself through his most important students and their students (Weisse, Salzer, Jonas, Oppel, Oster, Schachter, Laufer, Burkhart). I also discussed the dispersal of Schenker's Nachlass and presented some of my own original research on Schenker's work with Reinhard Oppel, and the initial reception of Schenkerian Theory in Germany.

Since the audience was interested in my own research, I presented new material. Specifically, for the past several years I have been working on a critique of my own publications to date in my career - i.e. assembling material for a review- article "Jackson-contra-Jackson" - my own Kontrapunkt (I have been dissatisfied with some of the published critical reviews of my work, and I want to do a better and more thorough job of critiquing than I think my critics have done!) Therefore, over the past several years, I have been carefully revising my readings of various pieces discussed in my writings. At Hanyang, I presented some new thoughts about Bruckner's Seventh Symphony (First Movement and Finale), and also a much-revised reading of Brahms's First Symphony (Finale). Since there was some question of why one might graph a piece from 3 rather than 5, I presented my new, revised reading of the Brahms from 3 rather than 5, with discussion of the reasons underlying my change of interpretation. 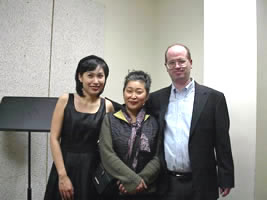 Since my mother Sarah Jackson - a distinguished artist - passed away while I was in Korea after a long illness, I also made a presentation in her memory. Specifically, I analyzed Brahms's song "Todessehnen" ("Longing for Death") and the slow (third) movement of Brahms's Second Piano Concerto, and discussed the poetic and structural significance of the quotation of the song in the concerto movement. In the course of my lectures, I the made the acquaintance of a number of musicologists and music historians and also met recent Korean graduates from various distinguished universities and institutions in the US, Germany, and Austria now teaching at various Korean universities. It was especially nice to meet one of our graduate students, Kyung-Young Chung, who attended one of my lectures, and who is now teaching at the National Conservatory and other universities. As a result of Jae-Sung Park's invitation, I also attended two concerts at the Seoul Cultural Arts Center. The first concert was music by contemporary Korean composers; the second was a String Quartet concert including music by Haydn, Schubert, and Janacek. I was struck both by the excellence of the performers and the enthusiasm of the audiences. It was heartening to see many young people in the audiences at both concerts. Additionally, I visited a Buddhist temple in the mountains outside of Seoul, and a Ceramics Museum in a neighboring city. Also, I went to two palaces in Seoul and also the National Folk Museum, which featured the history of Korean culture. Over the next few weeks, I will post photographs and further detailed information about the trip. Perhaps most important for our school, I made many contacts in the Korean Music Theory establishment based at Hanyang University. 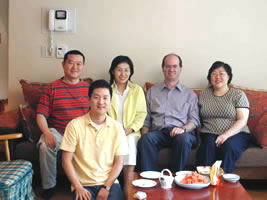 Here is a little background about Hanyang University, which looks like it will be the hub of the new Music Theory Movement in Korea: Hanyang University, starting from the college of engineering in Seoul Korea, was founded in 1939. It has grown into the most distinguished education and research institute in Korea and has produced tens of thousands of well-trained engineers and leaders in many fields of industrial technologies. The educational achievements and technological advances that the college has made since its early establishment have greatly contributed to the industrialization of Korea. The leading and central roles of college for the educational and technological innovations have been highly recognized not only in Korea but throughout the world. Hanyang University has 19 colleges, 95 departments, a School of Graduate Studies, a university hospital with 1,106 beds, and 31 research institutes at Seoul and Ansan campuses. Enrollment totals 25,000, including 4,600 graduate students. Full-time faculty numbers 900, as well as some 3,000 part-time professors and instructors.