Timothy L. Jackson's primary interests center on the music of the nineteenth and twentieth centuries, and Schenkerian theory. He is well-known for his work on the music of Richard Strauss, on which he wrote his doctoral dissertation (Ph.D. in Music Theory, 1988, the Graduate Center of the City University of New York). Since completing the doctorate under Carl Schachter, Jackson's interests have branched out from German music to encompass the Russian and Finnish traditions. He authored the monograph on Tchaikovsky's Sixth Symphony (Pathetique) for the Cambridge Handbooks Series (1999) in addition to co-editing Bruckner Studies (Cambridge, 1997), Sibelius Studies (Cambridge, 2001) and Perspectives on Anton Bruckner (Ashgate, 2001). With Paul Hawkshaw (Yale), he wrote the composer article on Bruckner for the Revised New Groves Dictionary of Music and Musicians ( 2001). Currently, he is editing a volume of Richard Strauss Studies, also for Cambridge. Jackson has published on a wide range of topics, especially on theories of form and large-scale tonal structure, in such theory journals as The Journal of Music Theory, Music Analysis, In Theory Only, and Theory and Practice. His research on twentieth-century composers such as Schoenberg and Shostakovich, has been published in an array of journals including 19th-century Music, The Musical Quarterly, Music and Letters, Journal of Musicological Research, and the International Journal of Musicology, and also books published by Cambridge, Duke, and Princeton University Presses. 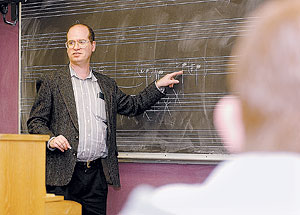 Below: Dr. Jackson is featured on Finnish Television in a segment about Jan Sibelius: