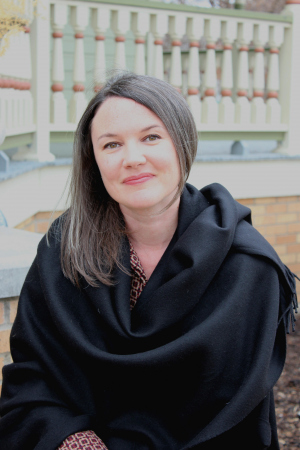 Rebecca Dowd Geoffroy-Schwinden is a historian of eighteenth-century music cultures, particularly the French Revolution and musical labor since the Age of Revolutions (c. 1775–1848), and often draws on the fields of feminist musicology and historical sound studies. Much of her research is archival in nature. Through a wide lens, she examines the implications of music’s status as property under modern democracy and capitalism. Her first book, From Servant to Savant: Musical Privilege, Property, and the French Revolution (Oxford University Press, 2022), exposes the fundamental role that the French Revolution played in the emergence of modern professional musicianship and music historiography. This expertise extends into her newest research projects, which include crypto music, the global circulation of music through late eighteenth-century fashion magazines, and the musical diaspora of the French and Haitian revolutions. She always places people and their lived musical experiences at the center of her research.

Geoffroy-Schwinden’s article “Music as Feminine Capital in Napoleonic France: Nancy MacDonald’s Musical Upbringing,” received a Music & Letters Centenary Prize for best original article in musicology. Other scholarly publications have appeared in edited volumes with Duke University Press and Oxford University Studies in the Enlightenment, and in journals including Studies in Eighteenth-Century Culture and Women & Music: A Journal of Gender and Culture, among others. Her reviews are published in leading international journals such as Eighteenth-Century Music and the Revue de musicologie. She presents regularly at national and international scholarly conferences, including the annual meetings of the American Musicological Society and the American Society for Eighteenth-Century Studies, and she has given talks throughout Europe and in Tokyo.

Her research has been supported by grants from the American Musicological Society, University of North Texas and Duke University. She was inducted into the Society of Duke Fellows (2009) and Phi Beta Kappa (Penn State, 2007); and in 2020 she was a UNT Washington, D.CFaculty Fellow.

She reviewed Dallas Opera productions for Opera News from 2017–2019; and served as Vice-President of the Society for Eighteenth-Century Music (SECM) from 2018–2020. More recently Geoffroy-Schwinden has been deeply engaged with SECM’s Diversity, Equity, Inclusion and Accessibility initiatives, as well as its graduate student mentorship. She gave public talks with local music organizations like the Dallas Chamber Music Society, Dallas Symphony Orchestra and UNT’s Osher Lifelong Learning Institute.

She teaches master’s level courses in research methods and eighteenth-century music. The doctoral seminars offered draw on her research specializations in eighteenth-century music, feminist musicology, historical sound studies, and archive studies, and is currently developing undergraduate and graduate courses about music in global contexts from 1500 to 1900, the histories and futures of music under capitalism, and technologies of musical production from Bach to the blockchain. Her courses often incorporate hands-on archival research, critical listening skills beyond score reading, technology skills such as audio editing, critical information literacy, public engagement, and professional development.

A classically trained pianist, she has also studied harpsichord and mallet percussion. She played vibraphone and keyboard for the Duke New Music Ensemble [dnme].

She will serve as the inaugural program coordinator of UNT’s new BA in Critical Studies in Music and Society. She welcomes applications from prospective graduate students who plan to organize their thesis or dissertation around any aspect of eighteenth-century music; French and Francophone music; musical labor; music and property; feminist musicology/women in music; historical sound studies; and archive studies.