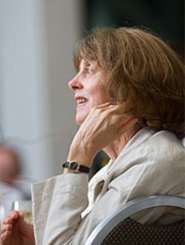 Margaret Notley’s second monograph is forthcoming in fall 2019: “Taken by the Devil”: The Censorship of Frank Wedekind and Alban Berg’s Lulu, AMS Studies in Music (New York: Oxford University Press, 2020). Her first monograph is Lateness and Brahms: Music and Culture in the Twilight of Viennese Liberalism, AMS Studies in Music (New York: Oxford University Press, 2007). Dr. Notley also edited Opera after 1900: An Anthology of Critical Essays (Farnham, UK: Ashgate, 2010). Her work has appeared in Journal of the American Musicological Society, 19th-Century Music, Journal of Musicology, and a number of anthologies. For an article on late nineteenth-century adagios she received the American Musicological Society’s Alfred Einstein Award in 2000. She was a member of the Editorial Board of the Journal of Musicology from 2001 to 2016 and has been an Associate Editor of 19th-Century Music since 2006. Her work has been supported by grants from the Fulbright Scholar Program (2001), National Endowment for the Humanities (1996), and American Philosophical Society (1995, 2011, and 2015). Dr. Notley has served on several committees for the American Musicological Society, including the Lewis Lockwood Award Committee, the Alfred Einstein Award Committee, and the Committee on the Status of Women.

Other recent work includes an article in German, “Fortwirkungen der Kammermusik Beethovens,“ in Die Kammermusik, edited by Martina Sichardt and Friedrich Geiger, Vol. 3, Beethoven-Handbuch, edited by Albrecht Riethmüller (Laaber: Laaber-Verlag, 2014); and “Ancient Tragedy and Anachronism: Form as Expression in Brahms’s Gesang der Parzen” in Expressive Intersections in Brahms: Essays in Analysis and Meaning, edited by Heather Platt and Peter H. Smith (Bloomington, IN: Indiana University Press: 2012 ); and she wrote a chapter for a volume about Mahler forthcoming from Cambridge University Press in 2020.