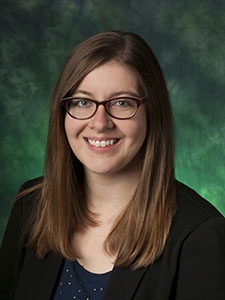 Gillian Robertson, a native of Ontario (Canada), is a senior lecturer of music theory. Prior to her appointment at UNT, she held a Visiting Faculty position at Humboldt State University (Arcata, CA) and a Lecturer of Music Theory/Ear Training position at Texas A&M University–Kingsville. Gillian holds a Ph.D. in music theory from The Florida State University (2015) where she studied with Drs. Joseph Kraus and Matthew Shaftel. She was the recipient of a Joseph-Armand Bombardier Canada Graduate Scholarship, sponsored by the Social Sciences and Humanities Research Council of Canada (SSHRC) while completing her M.A. in music theory at the University of Western Ontario. Gillian received her Bachelor of Music (Honors Theory with Distinctions) from Wilfrid Laurier University (Canada).

Her research interests include the applicability of narrative theory to nineteenth- and twentieth-century theme and variations, musical meaning, nostalgia in music, the music of Rachmaninoff, and online music theory pedagogy. Gillian has presented research on these topics at various regional conferences (MTSE, TSMT, RMSMT, and SCSMT) as well as at the Annual Meeting for the Society for Music Theory. In 2019, she gave an invited talk as part of the MHTE’s Division Lecture Series at UNT. Her lecture, “Past, Yearning, and Fantasy: Interpreting Musical Nostalgia,” proposed a three-part interpretative model for identifying nostalgia in music using Rachmaninoff’s Rhapsody on a Theme of Paganini as a case study. Gillian has also co-authored an article with Judith Ofcarcik (James Madison University) on “Variation Form,” which was solicited by Oxford University Press and published in Oxford Bibliographies Online in 2021.

While at UNT, Gillian has taught undergraduate core music theory courses (Theory I–IV), Aural Skills III, Explorations in Music I, and Special Problems courses dealing with musical meaning. Beginning in 2018, Gillian spearheaded the development and teaching of asynchronous online sections of the undergraduate core theory curriculum (Theory I–IV). Currently, all four of these courses are INET-approved by CLEAR (Center for Learning Experimentation, Application & Research). Gillian has given numerous presentations on the topic of online music theory course development within the College of Music as well as invited presentations on the subject to both graduate music education and graduate theory pedagogy classes.