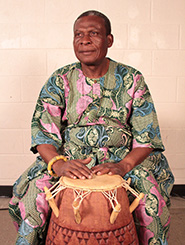 Alorwoyie is from Anlo-Afiadenyigba in the Volta Region of Ghana, West Africa and is highly regarded as one of Ghana's foremost virtuosos of traditional music and dance. He is professor of music, principal dancer/choreographer and Director of the UNT African Percussion Ensemble. Alorwoyie joined the College of Music faculty in 1996.

He was discovered by Phillip Gbeho, then head of the Institute of Art and Culture in Ghana at Hogbetsotso and annual Anlo-traditional cultural festival. Gbeho was so impressed with young Gideon that he offered him a position at the Institute of Art and Culture in 1964. From 1967-84, Alorwoyie worked in the Department of African Studies at the University of Ghana as chief master drummer of the Ghana National Dance Ensemble. Here he acquired the ability to perform music from different cultures. He toured France, the United Kingdom, West Germany, Switzerland, the former USSR, Yugoslavia, the Caribbean, Seoul Korea, Hong Kong, China, Canada, Abu Dhabi, United Arab Emirates and the United States as a member of the Ghana National Dance Ensemble. Alorwoyie is the founder and the Artistic Director of the Afrikania Cultural Troupe of Ghana, West Africa, member of the Ethnomusicology Association, and member of the Council of Elders, Dance Africa Chicago.

Alorwoyie has worked with notable scholars and composers such as David Locke, John Chernoff, and Steve Reich. He held positions at the State University of New York, College at Brockport, the American Conservatory of Music and at the Old Town School of Folk Music in Chicago before joining the University of North Texas faculty. He is the founder and artistic director of the Chicago-based African-American Unity Ensemble and a member of the advisory council of the African Music Caucus and Percussive Arts Society. His recent projects have included performances at the Ghana Fest in Chicago, master classes in the Ritual Music of Ghana, West Africa at the New England Conservatory in Boston and performances at the inauguration of CEANA in Atlanta. He currently holds the position of master drummer and artistic director of the UNT African Percussion Ensemble.

Torgbui Gideon Foli Alorwoyie is a wonderful musician, a superb dancer and has command of a vast repertoire. He is a virtuoso instrumentalist who has expanded the range of traditional African drumming and possesses extraordinary control of tonal inflection over a wide dynamic range. When he performs, one senses his total command of the medium.

Professor Midawo Gideon Foli Alorwoyie has been installed as Paramount Chief at Tsiyinu-Afegame/Afife, traditional area in the Volta Region of Ghana, West Aftrica, under the stool name of Torgbui Foli Ameanyo III, (Dufia of Tsiyinu/Afife). The event took place on Saturday March 13, 2004.