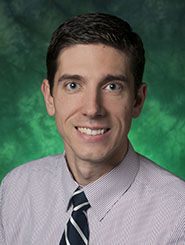 Benjamin Graf is an active scholar in music theory, pedagogy and performance. He defended his dissertation, An Analytical Study of Structural Dualism and Paradox in Beethoven, in February 2016 and earned his Ph.D. in Music Theory from the University of North Texas in May 2016.  At UNT, Benjamin was the recipient of a Teaching Fellowship in the College of Music, and he was awarded numerous scholarships, including the Robert W. Ottman Graduate Music Theory Scholarship as well as the Ethelston and Lamarr Chapman Music Theory Scholarship.  He was chosen by the MHTE Division as the Outstanding Graduate Student in Music Theory for 2010-2011 and the Outstanding Doctoral Student in Music Theory for 2011-2012.  Benjamin came to the University of North Texas on a trumpet performance scholarship and studied privately with world-renowned trumpet pedagogue Keith Johnson, earning his Master of Music degree in 2010.  As an undergraduate, he was the Presidential Scholar for the College of Fine Arts at Towson University, where he graduated summa cum laude with a Bachelor of Science in Music Education in 2008.  Benjamin’s current research interests include Schenkerian analysis, Beethoven, the sublime, and formal-tonal paradoxes in classical-era sonatas.  His article Beethoven Op. 7, II and the Sublime was published in Harmonia vol. 10 and he is working on an article on the nature and significance of "embedded voice exchanges" in Bach, Beethoven and Chopin.  Benjamin has presented his research at the national and international level, including conferences in Indiana, Florida, Texas, Maryland, Australia and Europe.  Recently, he presented "Embedded Voice Exchanges: The Gateway to Tonal and Metaphorical Transformation" at the Texas Society for Music Theory in Houston, TX and at the 9th European Music Analysis Conference (EuroMAC 9) in Strasbourg, France.  Locally, his poster presentation, “From Micro to Meta,” won 1st Place in the Humanities category at the UNT Graduate Research Exhibition and 3rd Place at the regional (Federation) level.